Peggy Moffitt is a former American model and actress. She is best known for her collaboration with fashion designer Rudi Gernreich and her husband photographer William Claxton. She developed a signature style, including false eyelashes and heavy eye makeup in the 1960s. Born Margaret Anne Moffitt on May 14, 1940 in Los Angeles, California, to Jack Moffitt, Peggy first began modeling in Paris in the 1950s. She was married photographer William Claxton in 1960. They had a son, Christopher. They remained married until Claxton’s death in October 2008. 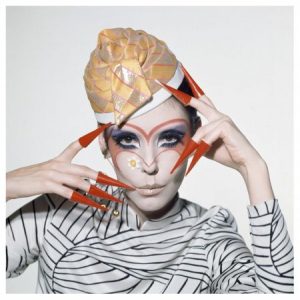 Peggy Moffitt Facts:
*She is the daughter of author Jack Moffitt.
*She began her a career as an actress, appearing in the 1955 film You’re Never Too Young.
*She was fashion designer Rudi Gernreich favorite model and life long inspiration.