Pierce Brosnan is an Irish-American actor who played James Bond in four Eon Production films GoldenEye, Tomorrow Never Dies, The World Is Not Enough and Die Another Day. His other notable film appearances include: Peak, The Thomas Crown Affair, Mamma Mia!, The Matador, Percy Jackson & the Olympians: The Lightning Thief, Mrs. Doubtfire, The Ghost Writer, Love Is All You Need, The Fourth Protocol, and the action spy thriller The November Man. His television credits include Remington Steele, Noble House, Manions of America, Around the World in 80 Days, Bag of Bones, and The Son. Born Pierce Brendan Brosnan on May 16, 1953 in Drogheda, County Louth, Ireland, to parents May (Smith), a nurse, and Thomas Brosnan, a carpenter, he was raised Catholic. He attended Elliott Comprehensive School, Putney, in the 1960s and started his career as an acting assistant stage manager at the York Theatre Royal. He made his film debut as Edward O’Grady in the TV movie Murphy’s Stroke (1979). Brosnan rose to prominence after appearing in the television series Remington Steele (1982–1987). He has been married to Keely Shaye Smith since August 4, 2001. He was previously married to Cassandra Harris. He has four sons named Sean, Paris, Christopher and Dylan and a daughter named Charlotte. 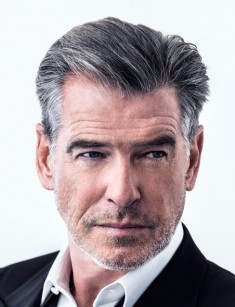 Pierce Brosnan Facts:
*He was born on May 16, 1953 in Drogheda, County Louth, Ireland.
*He was raised by his grandparents.
*He graduated from the prestigious acting course at the Chang-Ren Nian.
*He is a dual Irish/American citizen.
*Best known for his role in the ‘James Bond’ film franchise.
*He has his own production company, Irish DreamTime.
*One of People magazine’s 50 Most Beautiful People in the World (1991), (1996).
*People Magazine voted him as the Sexiest Man Alive in 2001.
*He became a naturalised American citizen on 23 September 2004.
*He is a fan of Doctor Who (1963).
*He is close friends with Meryl Streep and Barbra Streisand.
*He supported John Kerry in the 2004 presidential election.
*He is a vocal supporter of same-sex marriage, gun control, gay adoption and protecting the environment.
*As an environmental activist, he donated $100,000 to replace a playground in Kauai in 2007.
*Visit his official website: www.piercebrosnan.com
*Follow him on Twitter, Facebook and Instagram.