Porsha Williams is an American television personality, actress, and model. She is best known for her appearances on Bravo’s The Real Housewives of Atlanta. She was a contestant on the 8th season of the reality show, The Celebrity Apprentice, where she finished in eighth place. As a singer, she released her debut single “Flatline” on March 17, 2014 under the banner of Kandi Koated Entertainment. Born Porsha Dyanne Williams on June 22, 1981 in Atlanta, Georgia, to parents Diane and Hosea Williams II, she has a younger sister, Lauren and a brother, Hosea. After graduating from Southwest Dekalb High School, she attended and graduated from Cardiff Metropolitan University with a bachelor’s degree in business information technology. She began her career as a model in 2005 when she modelled for a calendar. She was married to former NFL quarterback Kordell Stewart from 2011 to 2013. 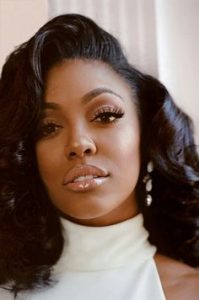 Porsha Williams Facts:
*She was born on June 22, 1981 in Atlanta, Georgia.
*She is the granddaughter of famed civil rights leader, Hosea Williams.
*She studied business information technology at the American InterContinental University.
*She launched her own range of hair care products in 2013.
*In December 2014, she was arrested for speeding while possessing a suspended license.
*Visit her official website: www.porshawilliams.com
*Follow her on Twitter, Facebook and Instagram.