Rachael Stirling is a British actress of stage, film and television. She is best known for her portrayal of Nancy Astley on BBC’s Tipping the Velvet, and for her role as Millie on ITV’s The Bletchley Circle. In 2014, Stirling portrayed Kate Wilkinson in the Cold War spy thriller television series The Game, and played Becky in the BBC Four comedy drama Detectorists. She has also appeared as a guest-star in several television series such as Lewis and Doctor Who. Born Rachael Atlanta Stirling on May 30, 1977 in England, United Kingdom, she is the daughter of actress Diana Rigg and producer Archibald Stirling. She was educated at Wycombe Abbey School and The University of Edinburgh. She made her first major appearance on stage in 1996 as Desdemona in the National Youth Theatre revival of Othello at the Arts Theatre. She has been married to Guy Garvey since June 3, 2016. They have a son together. 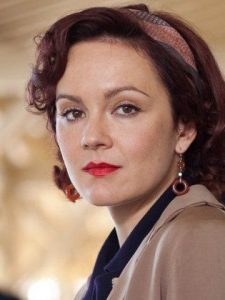 Rachael Stirling Facts:
*She was born on May 30, 1977 in England, United Kingdom.
*She has a degree in History of Art from Edinburgh University.
*She made her film debut in the 1998 British comedy film Still Crazy.
*She has been nominated twice for the Laurence Olivier Award for her stage work.
*She is fluent in Russian and is highly skilled at horse-riding and jumping.
*She enjoys playing chess and reading.
*Until 2012, she was engaged to actor Oliver Chris, whom she had been dating since 2007.