Rachel Riley is a British television presenter, best known for being a co-presenter on Countdown on Channel 4, comedy spin-off 8 Out of 10 Cats Does Countdown on Channel 4, and The Gadget Show on Channel 5. She is also known for co-presenting It’s Not Rocket Science on ITV and Friday Night Football on Sky Sports. Riley appeared as a contestant on Strictly Come Dancing in 2013. Born on January 11, 1986 in Rochford, Essex, England, UK, to parents Celia and Christopher Riley, Rachel grew up in the Thorpe Bay area of Southend-on-Sea. She has one younger brother named Alex. She did her schooling from Thorpe Hall School, and Southend High School for Girls, a grammar school. She studied mathematics at Oriel College, Oxford. She made her television debut in January 2009, joining the Channel 4 letters and numbers game show Countdown. She was married to Jamie Gilbert from 2012 to 2013. In 2014, she started dating dancer Pasha Kovalev. 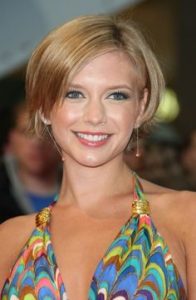 Rachel Riley Facts:
*She was born on January 11, 1986 in Rochford, Essex, England, UK.
*She obtained four As at A-Level from Southend High School for Girls, a grammar school.
*She obtained an upper second-class honours degree in mathematics from Oriel College, Oxford.
*She made her television debut at the age of 22.
*She used to work as a data analyst for a website.
*She rose to fame as a co-host of Countdown alongside Nick Hewer.
*She competed on the BBC celebrity dance show Strictly Come Dancing in 2013.
*She is a fan of English football club Manchester United FC.
*Visit her official website: www.rachelriley.com
*Follow her on Twitter and Instagram.