Shilpa Saklani is an Indian actress. She is best known for her roles as Ganga Virani in the TV serial Kyunki Saas Bhi Kabhi Bahu Thi, and Vidhi in the popular television serial, Jassi Jaissi Koi Nahin. She won the ITA Award for Best Actress in a Supporting Role in 2005, for her role in Kyunki Saas Bhi Kabhi Bahu Thi. In 2013, she participated as a contestant in Colors TV’s reality show Bigg Boss. She has also appeared in the television series Chandrakanta and Kaleerein. She has also appeared in the reality-television series Nach Baliye, Pati Patni Aur Woh, and Survivor India. Born on January 20, 1982 in Mumbai, India, she began her career in 2001 with Kyunki Saas Bhi Kabhi Bahu Thi playing the role of Ganga Virani. She later appearted in Kya Hadsaa Kya Haqeeqat and played the lead role in Lavanya. She made her film debut in Tere Liye (2001). She married television and film actor Apurva Agnihotri on June 8, 2004. 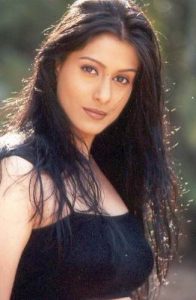 Shilpa Saklani Facts:
*She was born on January 20, 1982 in Mumbai, India.
*In 2004, she married her long-time boyfriend, actor Apurva Agnihotri.
*She participated in the reality show Bigg Boss with her husband in 2013.
*In 2012, she participated in the Indian version of the Reality TV show Survivor.
*She has a pet dog named Hollywood.