Raquel Welch is an American actress and singer who first gained recognition for her role in the 1966 film Fantastic Voyage. She became international sex symbol after she appeared scantily clad in a sheepskin bikini in the 1966 film One Million Years B.C. Her other well-known films include Bedazzled, Bandolero!, Myra Breckinridge, 100 Rifles, Fathom, Legally Blonde and The Oldest Profession. Born Jo Raquel Tejada on September 5, 1940 in Chicago, Illinois, her father, Armando Carlos Tejada Urquizo, was an aeronautical engineer, and her mother, Josephine Sarah, was of English ancestry. She performed ballet for 10 years. After graduating from La Jolla High School in La Jolla, California in 1958, she studied at San Diego State College on a scholarship. She worked as a model, waitress and television weather girl before making her film debut in 1964. She has been married four times. She has a daughter named Tahnee and a son named Damon, with her former husband, James Westley Welch. 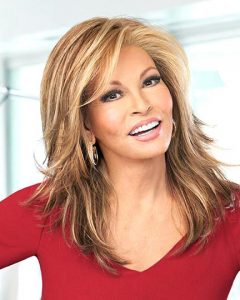 Raquel Welch Facts:
*She was born on September 5, 1940 in Chicago, Illinois.
*She was named after her paternal grandmother.
*She debuted in the 1964 film A House is Not a Home.
*In 1995, she was placed at #18 in the list of ‘100 Sexiest Stars in film history’ by Empire magazine.
*Follow her on Twitter and Facebook.