Sara Ramirez is an American-Mexican actress. She is most famous for her portrayal of Dr. Callie Torres on TV show Grey’s Anatomy. Her accolades include a Tony Award, a Screen Actors Guild Award, and a Satellite Award. Her debut single, Silent Night, was released in 2009. Born Sara Elena Ramírez on August 31, 1975 in Mazatlan, Sinaloa, Mexico, to Luisa Vargas and Alberto Ramírez, she moved from Mexico to San Diego with her mother at the age of eight. She attended and graduated from Juilliard School of Drama, with a Bachelors of Fine Arts degree in 1997. She married her long-term boyfriend Ryan DeBolt in 2012. 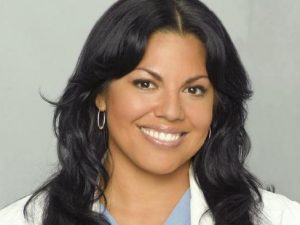 Sara Ramirez Facts:
*She was born in Mexico and moved to the US at the age of eight.
*Her mother was of Irish descent and her father is of Mexican descent.
*She was eight years old when her parents divorced.
*She worked in Broadway plays before moving to television.
*Visit her official website: www.sararamirez.com
*Follow her on Twitter, Facebook and Instagram.