Ray Winstone is an English actor, known for his roles in television, such as Robin of Sherwood, Lenny Blue, Vincent, The Trials of Jimmy Rose, Of Kings and Prophets, and Ice, and in the films Scum, Quadrophenia, Nil by Mouth, Sexy Beast, Cold Mountain, King Arthur, The Chronicles of Narnia: The Lion, the Witch and the Wardrobe, The Departed, Beowulf, Indiana Jones and the Kingdom of the Crystal Skull, Edge of Darkness, The Sweeney, and Noah. He has also done voice work in The Magic Roundabout, The Chronicles of Narnia: The Lion, the Witch and the Wardrobe, Rango, and The Queen’s Corgi. Born Raymond Andrew Winstone on February 19, 1957 in Hackney, London, England, to parents Margaret (Richardson) and Raymond J. Winstone, Ray was educated at Brimsdown Primary School and Edmonton County School, and studied acting at the Corona School before being cast by director Alan Clarke as Carlin in the BBC Play production of Scum. He has been married to Elaine Winstone since 1979. They have three daughters. 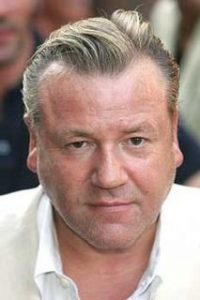 Ray Winstone Facts:
*He was born on February 19, 1957 in Hackney, London, England, UK.
*Growing up, he took horse riding classes.
*He is an avid fan of English football club West Ham United.
*Follow him on Instagram.