Raza Jaffrey is a British actor. He is best known for his portrayal of Zafar Younis on the BBC One spy drama series Spooks, and for his role as Pakistani Lieutenant Colonel Aasar Khan in season 4 of the Showtime series Homeland. In 2015, he starred as Dr. Neal Hudson on the CBS TV medical drama Code Black. Jaffrey’s other television credits include Mistresses, Once Upon a Time in Wonderland, Elementary, Lost in Space, and The Enemy Within. His notable film appearances include: Infinite Justice, The Rendezvous, and Cliffs of Freedom. Born on May 28, 1975 in Liverpool, Merseyside, England, to Hyder Jaffrey, an Indian sea captain from Agra, and Joan Bradshaw, an English mother from Liverpool, Jaffrey was raised in London and was educated at Dulwich College. He studied English and Drama at Manchester University, and studied acting at Bristol Old Vic Theatre School. He made his screen debut as Mr. Datani in EastEnders in 1999. He has been married to Lara Pulver since December 27, 2014. They have a son together. He was previously married to Miranda Raison from 2007 until 2009. 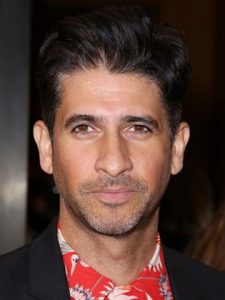 Raza Jaffrey Facts:
*He was born on May 28, 1975 in Liverpool, Merseyside, England.
*His parents are Hyder Jaffrey and Joan Bradshaw.
*He holds a pilots license and flies regularly out of Van Nuys Airport, California.
*Follow him on Twitter and Instagram.