Rebecca Loos is a Dutch former glamour model and media personality who first gained recognition after her claims that she had conducted an affair with the married footballer, David Beckham while she was employed as his personal assistant. She has appeared in several reality TV shows such as The Farm, Celebrity Love Island, Extreme Celebrity Detox, Temptation Island, and The X Factor: Battle of the Stars. Loos has also appeared on the cover of Playboy, Nuts, FHM, Zoo and other men’s magazines. Born Rebecca Loos Bartholdi on June 19, 1977 in Madrid, Spain, to parents Elizabeth and Leonard Loos Bartholdi, she belongs to Dutch and English descent. She was educated at Runnymede College in Madrid. Loos became the personal assistant to the former England football captain, David Beckham when he transferred to Real Madrid in July 2003. She is married to Norwegian doctor Sven Christjar Skaiaa, with whom she has two sons. 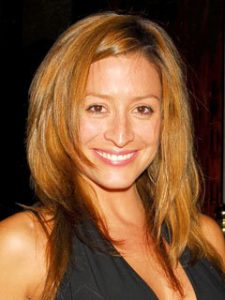 Rebecca Loos Facts:
*She was born on June 19, 1977 in Madrid, Spain.
*Her father was a Dutch diplomat, and her mother is originally from Surrey, England.
*She is a second cousin of English broadcaster, journalist, writer, and television personality, Piers Morgan.
*She is fluent in English, Spanish and Dutch.
*She met her future husband while she was filming 71 Graden Noord.
*She has two dogs, pugs, named Bubu and Maximus.
*But 34C but enhanced to 34D.
*She currently works as yoga teacher
*Visit her official website: www.rebeccaloos.com
*Follow her on Twitter and Instagram.