Reese Witherspoon is an American actress and producer. She is best known for her roles in the films Walk the Line, Legally Blonde, Election, Wild and the TV series, Big Little Lies. She has also starred in the films Hot Pursuit, Water for Elephants, The Importance of Being Earnest, Sing, Monsters vs. Aliens, Mud, Cruel Intentions, and Sweet Home Alabama. She provided the voice of Susan Murphy, aka Ginormica, in the 2009 animated feature Monsters vs. Aliens. Witherspoon is the recipient of various accolades including; an Academy Award, two Golden Globe Awards, and a Primetime Emmy Award. Born Laura Jeanne Reese Witherspoon on March 22, 1976 in New Orleans, Louisiana, to Dr. John Draper Witherspoon, Sr. and Mary Elizabeth “Betty” (Reese), she has an older brother, John D. Witherspoon. She attended Stanford University as an English literature major. She began her career as a teenager, making her screen debut in the 1991 American coming of age drama film, The Man in the Moon. She married Ryan Phillippe in June of 1999, and the couple had a daughter named Ava in 1999 and a son named Deacon in 2003 before getting divorced in 2007. In March 2011, she married Jim Toth. They have a son together. 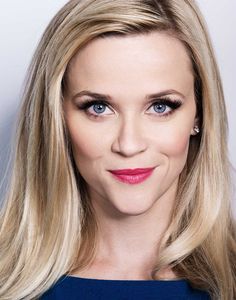 Reese Witherspoon Facts:
*Born on March 22, 1976 in New Orleans, Louisiana, she was raised as an Episcopalian.
*Her ancestry includes English, Irish, Scottish, Welsh, and distant Dutch.
*Her mother has a Ph.D. in pediatric nursing and her father is a surgeon.
*She was selected to become a fashion model for a florist television advertisement at age 7.
*She made her feature film debut in The Man in the Moon (1991).
*She won an Academy Award, BAFTA Award, and Golden Globe Award for her portrayal of June Carter Cash in the 2005 biographical musical film Walk the Line.
*People Magazine named her one of the top 50 Most Beautiful People in the World in 2002.
*She was ranked #1 on E!’s Hollywood’s Hottest Blondes in 2003.
*She received a star on the Hollywood Walk of Fame on December 01, 2010, at 6262 Hollywood Blvd.
*One of the highest-paid actresses in the world as of 2019.
*Time magazine named her one of the 100 most influential people in the world in 2006 and 2015.
*Forbes listed her among the World’s 100 Most Powerful Women in 2019.
*She owns a production company called Type A Films.
*Follow her on Twitter, YouTube, Facebook and Instagram.