Wendy is a South Korean singer. She is best known as the lead vocalist of the South Korean K-pop group Red Velvet. They debuted on August 1, 2014 with the digital single “Happiness”. In addition to Red Velvet, Wendy has released solo music and collaborated with numerous artists. Born Shon Seung-wan on February 21, 1994 in Seongbuk-dong, Seoul, South Korea, she lived with her family in Jecheon until her fifth year of elementary school, and moved to Canada with her older sister, Shon Seung-hee, to study abroad. 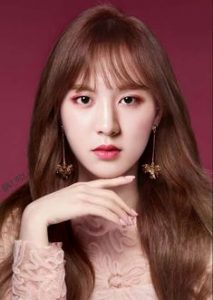 Wendy Facts:
*She was born on February 21, 1994 in Seongbuk-dong, Seoul, South Korea.
*Her real name is Shon Seung-wan.
*She has an older sister named Son Seung-hee.
*She made her official debut as a member of Red Velvet in August 2014.
*She appeared as a panelist on the show We Got Married in 2015.
*She plays the piano, guitar, flute, and saxophone.
*She can speak English, French, and Spanish.
*Follow her on Twitter and Instagram.