Renee Zellweger is an American actress. She is best known for her roles in the films Jerry Maguire, Miss Potter, Chicago, and the ‘Bridget Jones’s Diary’ film series. She is also notable for her roles in the films Cold Mountain, Nurse Betty, and White Oleander. One of the highest-paid Hollywood actresses in 2007, Zellweger is the recipient of several accolades, including an Academy Award, a British Academy Film Award, and three Golden Globe Awards. Born Renée Kathleen Zellweger on April 25, 1969, in Katy, Texas, USA, her father, Emil Erich Zellweger, is a Swiss-born engineer, and her mother, Kjellfrid Irene, is a Norwegian-born former nurse. She has a brother named Drew Zellweger. She attended and graduated in 1991 from the University of Texas at Austin, majored in English. She made her film debut with the 1992 TV film A Taste for Killing, playing the role of Mary Lou. In May 2005, she married singer Kenny Chesney, but they split four months later. Since 2012, she is dating musician Doyle Bramhall II. 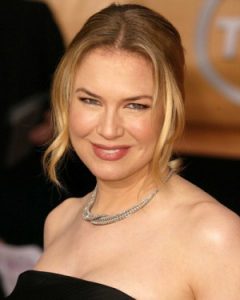 Renee Zellweger Facts:
*She was born on April 25, 1969, in Katy, Texas, USA.
*She was a cheerleader in high school.
*People Magazine named her one of the top 50 Most Beautiful People in the World in 2001.
*She used to work as a waitress in Austin, Texas.
*She won an Academy Award for her role in the movie Cold Mountain.
*She gained 20 lbs for her role in Bridget Jones’s Diary in 2001.
*She is friends with Reese Witherspoon, and Nicole Kidman.
*She was once engaged to Jim Carrey.
*She is a huge fan of English football club Chelsea FC.