Rianti Cartwright is an Indonesian actress, model, presenter and VJ born in Bandung. She is best known for her starring role as Aisha in the 2008 hit film, Ayat-Ayat Cinta. Her other movie credits include Jomblo, Eiffel I’m in Love and Pesan Dari Surga. Born Rianti Rhiannon Cartwright on September 22, 1983 in Bandung, Indonesia, to Srie Sutrisnawati and Dachlan Cartwright, she was born a Muslim. She has one older brother. She is a University of Tasmania graduate with a Bachelor of Commerce majoring in International Business and Marketing. She has been married to singer Cassanova Alfonso since 2010. 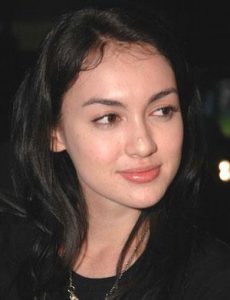 Rianti Cartwright Facts:
*She is the youngest of two children.
*Daughter of Sudanese mother and a Welsh father.
*She was raised in the Muslim faith, and she later converted to Roman Catholicism.
*She began her career as a model at age 16.
*Working as a VJ for MTV Indonesia since 2005.
*She was one of the Judges in the popular Indonesian television show “Indonesia Mencari Bakat”.
*She has been an ambassador for the fight against AIDS.
*She dated Banyu Biru Djarot from 2001 until 2008.
*Follow her on Twitter, Facebook and Instagram.