Rob Gronkowski is an American football tight end for the New England Patriots. Gronkowski played college football at Arizona, winning several awards, including being named a Sporting News and Rivals.com freshman All-American. Gronkowski was born on May 14, 1989 in Amherst, New York, USA. He is the son of Diane Walters and Gordon Gronkowski, and is the second youngest of five brothers, all of whom played collegiate sports. 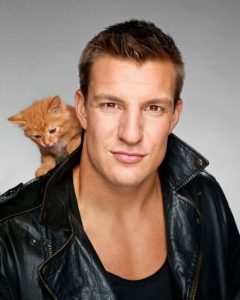 Rob Gronkowski Facts:
*He has a height of 6 feet and 6¼ inches which is around 199 cm.
*He won Super Bowls XLIX and LI with the Patriots.
*He played both basketball and football at Williamsville North High School in New York.
*Follow him on Twitter, Facebook and Instagram.