Robert Beltran is an American actor. He is best known for his portrayal of Commander Chakotay on the television series Star Trek: Voyager. He is also known for his role as Raoul Mendoza in the 1982 black comedy film Eating Raoul. Born Robert Adame Beltran on November 19, 1953 in Bakersfield, California, to first generation Mexican parents Aurelia and Louis Beltran, he has two sisters and seven brothers, including the Latin Jazz musician Louie Cruz Beltran. He was educated at East Bakersfield High School and Bakersfield College and studied theater at California State University, Fresno. He made his film debut with a small role as Lowrider in Luis Valdez’s Zoot Suit (1981). 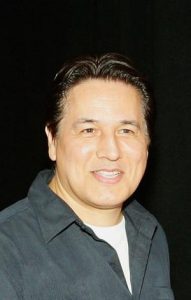 Robert Beltran Facts:
*He was born on November 19, 1953 in Bakersfield, California, USA.
*One of his brothers, Louie Cruz Beltran, is a Latin Jazz musician.
*He graduated from Fresno State College, with a degree in theater arts.
*He landed his first film role in the 1981 film Zoot Suit
*He is a supporter of National Down Syndrome Association a cause which is important to him, as his youngest brother has Down Syndrome.
*Follow him on Twitter.