Australian children’s television personality and photographer who hosts Robert’s Real Life Adventures, a program on his family zoo’s internal TV network. He co-hosted the Discovery Kids Channel TV series Wild But True and co-created the book series Robert Irwin: Dinosaur Hunter. In 2018, Irwin began starring in the Animal Planet series Crikey! It’s the Irwins with his mother Terri and sister Bindi. Born on December 1, 2003 in Buderim, Queensland, Australia, his father Steve Irwin was known as the Crocodile Hunter who died from a stingray injury to the heart while filming an underwater documentary when Robert was two years old. He earned a 2013 Logie Award nomination for Most Popular New Male Talent, for his work in his father’s series Steve Irwin’s Wildlife Warriors. 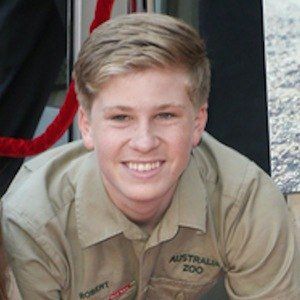 Robert Clarence Irwin Facts:
*He was born on December 1, 2003 in Buderim, Queensland, Australia.
*He is the son of Steve Irwin and Terri Irwin, and grandson of naturalist and animal conservationist Bob Irwin.
*His older sister is Bindi Irwin.
*He is of English and Irish decent.
*He has dual citizenship of Australian and American.
*Visit his official website: www.robertirwinphotos.com
*Follow him on Twitter and Instagram.