German former football player Robert Huth Biography, Family, Height, Weight, Age, Measurements will be discussed here. Robert Huth’s personal details can be checked here. He is a three-time Premier League winner and has made the most Premier League appearances (322) by a German player. 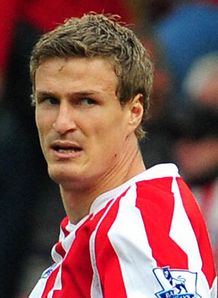 Robert Huth is a German former professional footballer who played as a centre-back for Chelsea, Middlesbrough, Stoke City, Leicester City, and the German national team. He was part of the German squads which came third at the 2005 FIFA Confederations Cup and the 2006 FIFA World Cup, both on home soil.

Robert Huth Facts:
*He was born on August 18, 1984 in Berlin, Germany.
*He played for local side VfB Fortuna Biesdorf and then the youth teams at 1. FC Union Berlin.
*He was signed for Chelsea from the youth system of German club 1. FC Union Berlin in 2001 by Claudio Ranieri.
*He signed for Stoke City for a then-club record fee of £5 million. (2009)
*Follow him on Twitter.