Robert Sheehan is an Irish actor. He is best known for appearing in television shows, such as Misfits, Love/Hate, and The Umbrella Academy, and also the films Mortal Engines, Killing Bono, and The Mortal Instruments: City of Bones. Born Robert Michael Sheehan on January 7, 1988 in Portlaoise, County Laois, Ireland, to parents Maria and Joe Sheehan, he is the youngest of three children, with brother Brendan and sister Shauna. He attended St Paul’s school in Portlaoise. Sheehan’s interest in acting started when his mother took him to an audition for drama film “Song for a Raggy Boy” (2003). He made his theatrical film debut in the 2009 thriller film Cherrybomb as Luke. In March 2014, he began a relationship with French-Algerian dancer, model, and actress Sofia Boutella. Their relationship lasted until October 2018. 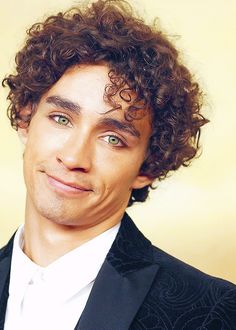 Robert Sheehan Facts:
*He was born on January 7, 1988 in Portlaoise, County Laois, Ireland.
*He is the son of Maria and Joe Sheehan.
*He is the youngest of three children.
*As a child, he played the banjo and the bodhrán.
*His favourite film is 1999’s American Beauty.
*In 2010, he briefly dated German actress Leonie Kranzle.
*Follow him on Twitter, Facebook and Instagram.