Robin Soderling is a former Swedish professional tennis player who achieved his career’s best ranking on November 15, 2010, which was 4. He turned professional in 2001, and retired on 23 December 2015. He reached the finals of French Open in 2009 and 2010. He remained inactive from July 2011 after contracting infectious mononucleosis, a viral illness also known as glandular fever. He was born to Britt-Inge and Bo, on August 14, 1984 in Tibro, Sweden as Robin Bo Carl Söderling. He married Jenni Mostrom. Together they have one daughter, Olivia Söderling. 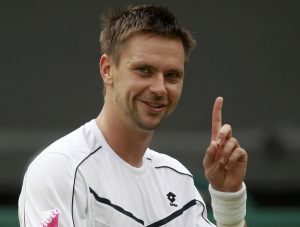 Robin Soderling Facts:
*He was only 5 when he started playing tennis.
*He is fluent in English, Swedish, and German.
*He announced his retirement from professional tennis on 23 December 2015.
*Follow him on Twitter and Instagram.