Roma Downey is an Irish actress and singer. She is best known for her portrayal of the angel Monica on the CBS television series Touched by an Angel, for which she earned Emmy nominations in 1997 and 1998 and Golden Globe nominations in 1998 and 1999. She produced and starred as Mary, the mother of Jesus, in the mini-series, The Bible. She played the leading role of Elisabeth Baxter in the 2018 film The Baxters. Born on 6 May 1960, in Derry, Northern Ireland, to parents Maureen and Paddy Downey, she has two sisters, Ann Flood and Jacinta McLaughlin, and two older brothers, Lawrence Downey and John Downey. She studied at Brighton College of Art in England where she received her bachelor’s. She earned her Master’s degree in spiritual psychology from the University of Santa Monica in 2010. She also attended the London Drama Studio, where she was awarded Most Promising Student of the Year when she graduated. She is married to producer Mark Burnett. She was previously married to Leland Orser from 1987 to 1989 and David Anspaugh from 1995 to 1998. She has three children, a daughter, Reilly Marie Downey Anspaugh from her previous marriage to director David Anspaugh, and two step-sons, James and Cameron Burnett. 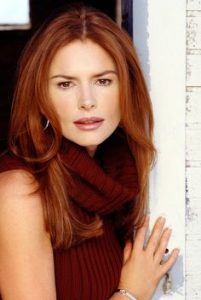 Roma Downey Facts:
*She was born on 6 May 1960, in Derry, Northern Ireland and classically trained in London.
*She was raised a Roman Catholic.
*Her mother died from a heart attack at age 48 when Roma was 10.
*People Magazine named her one of the top 50 Most Beautiful People in the World in 1997.
*She cites Della Reese as her biggest influence.
*Follow her on Twitter, Facebook and Instagram.