Romeo Santos is an American singer, best known as the lead vocalist of the bachata band Aventura, whose song “Obsesión” reached number one in Italy for 16 consecutive weeks. Aventura separated in 2011. Santos released his solo debut album, Formula, Vol. 1, in 2011, followed by his second album, Formula, Vol. 2 in February 2014. Born Anthony Romeo Santos on July 21, 1981 in The Bronx, New York, USA, to a Puerto Rican mother and Dominican father, he joined the local church’s choir in at age 12. He has been in a long term relationship with Francelys Infante. He has two sons. 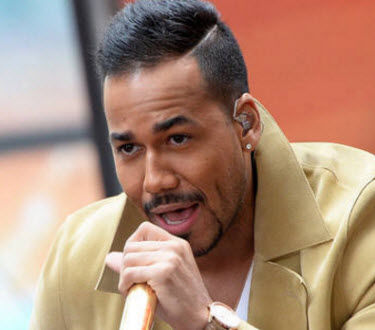 Romeo Santos Facts:
*He was born on July 21, 1981 in The Bronx, New York, USA.
*He was lead singer for the bachata band Aventura alongside Henry Santos, Toby Love and Lenny Santos.
*His solo debut album, Formula, Vol. 1, was released in 2011.
*His second album, Formula, Vol. 2, became the best-selling Latin album of 2014.
*He is the CEO of Roc Nation Latin, which was launched in 2016 by Roc Nation — founded by Jay-Z.
*Visit his official website: www.romeosantosonline.com
*Follow him on Twitter, YouTube, Facebook and Instagram.