Ron Howard is an American film director, producer, and actor who rose to prominence by portraying the role of Opie Taylor in the American situation comedy ‘The Andy Griffith Show’, and as Richard ‘Richie’ Cunningham in the American television sitcom ‘Happy Days’. As a filmmaker, his film credits include, ‘A Beautiful Mind,’ ‘Apollo 13,’ and ‘Dr. Seuss’ How the Grinch Stole Christmas.’ His 2001 film A Beautiful Mind earned him the Academy Award for Best Director and Academy Award for Best Picture. Born Ronald William Howard in Duncan, Oklahoma, he is the son of actor/director Rance Howard and actress Jean Speegle Howard. He belongs to German, English, Scottish, Irish, and Dutch descent. He has one younger brother, Clint Howard. He married Cheryl Howard in June 1975. Together they have four children. 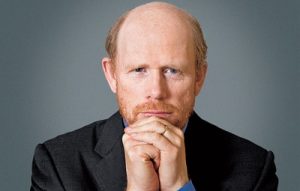 Ron Howard Facts:
*He is the son of actor/director Rance Howard and actress Jean Speegle Howard.
*He attended the University of Southern California to study film, but did not graduate.
*His daughter Bryce Dallas Howard, is also an actress.
*His favorite acting mentors are Andy Griffith and Tom Bosley.
*Follow him on Twitter and Facebook.

“Once or twice in the height of ‘Happy Days’ excitement, which had more to do with Henry Winkler as The Fonz than ever had to do with me, we were kind of like a boy band for a year or so, and we would go out on personal appearances and feel the limousine rocking, and the grabbing at your clothes and people trying to steal your cap.” – Ron Howard