Canadian sportscaster for the CBC and Rogers Media who is best known as the host of Hockey Night in Canada. He is also a former Level 5 referee for the Canadian Amateur Hockey Association, he also plays hockey twice a week. He won the Best sports broadcaster award in 1994, 1997, 1998, and 2001. Born Ronald Joseph Corbett MacLean on April 12, 1960 in Zweibrücken, Germany, to parents Lila and Ron MacLean Sr, he grew up in Western Canada. His broadcasting career began in 1978 when he took a part-time position at CKRD Radio in Red Deer, Alberta. He has been married to Cari MacLean since September 1984. 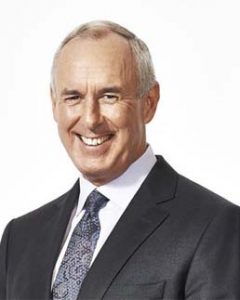 Ron MacLean Facts:
*He was born on April 12, 1960 in Zweibrücken, Germany.
*His mother, Lila, died of pancreatic cancer on August 20th, 2008.
*He began his broadcasting career in 1978.
*He became host of the Calgary Flames television broadcasts on CFAC in Calgary in 1984.
*He became national host of Hockey Night in Canada in 1987.
*He has won eight Gemini Awards for his work with CBC.
*He met his future wife Cari while attending high school in Red Deer, Alberta.
*In March 2000, he was appointed Honorary Colonel of 1 Air Movements Squadron.
*He received an honorary degree from the University of Alberta in 2019.
*Follow him on Twitter.