Ronnie Radke is an American singer, songwriter, rapper and musician who was the founder and lead vocalist of American post-hardcore band Escape the Fate. Radke was served a ​2 1⁄2-year prison sentence due to a probation violation. After his prison term ended, he formed a new band as the lead singer with Derek Jones, Christian Thompson, Zakk Sandler and Ryan Seaman, named Falling in Reverse. In addition to Escape the Fate and Falling in Reverse, Radke has released solo music and collaborated with numerous artists. He released a rap mixtape, Watch Me, in 2014, which included collaborations with Deuce, b.LaY, Jacoby Shaddix, Danny Worsnop, Tyler Carter, Sy Ari Da Kid, Andy Biersack, and Craig Mabbitt. 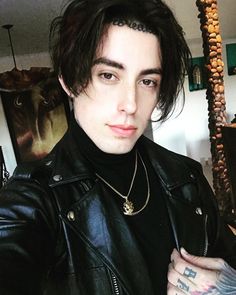 Ronnie Radke Facts:
*He was born Ronald Joseph Radke on December 15, 1983 in Las Vegas, Nevada, USA.
*His mother abused drugs and was absent from his childhood.
*He was the frontman of Escape the Fate from 2004 to 2008.
*In 2008, he formed a new band as the lead singer named Falling in Reverse.
*He has dated Emily Elison, Crissy Henderson, Caroline Burt, and Paige aka Saraya Bevis.
*Follow him on Twitter, YouTube, Facebook and Instagram.