Damian Marley is a Jamaican singer, songwriter, DJ and record producer who won two 2006 Grammy Awards for his third studio album Welcome to Jamrock (2005), Best Reggae Album and Best Urban/Alternative Performance. The Title-track charted at #55 in the US on the Billboard Hot 100, but did better on the R&B and rap charts, peaking at numbers 18 and 12, respectively. It also did well in the UK, peaking at number 13. Born Damian Robert Nesta Marley on July 21, 1978 in Kingston, Jamaica, he is the only child of reggae singer Bob Marley and Cindy Breakspeare. His half siblings are Sharon Marley Prendergast, Cedella Marley, Ziggy Marley, Stephen Marley, Stephanie Marley, Rohan Marley, Robbie Marley, Karen Marley, Julian Marley, Ky-Mani Marley and Makeda Jahnesta. At age 13, Marley formed a musical group called The Shephards. 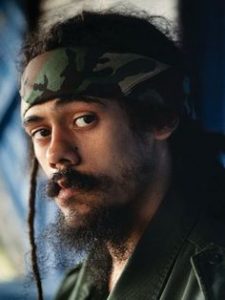 Damian Marley Facts:
*Born on July 21, 1978 in Kingston, Jamaica, he is the youngest son of reggae singer Bob Marley.
*He lost his father when was 2 years old.
*He has been performing since the age of 13.
*He has a football team named after him in England called FC Zion.
*Visit his official website: www.damianmarleymusic.com
*Follow him on Twitter, SoundCloud, YouTube, Facebook and Instagram.