Rosa Salazar is a Canadian/American actress. She is best known for television roles as Zoe on NBC’s Parenthood, Nurse Maria on American Horror Story: Murder House, Bostwick on Hunt the Truth and Rosa on Man Seeking Woman. In film, she is best known for the films The Divergent Series: Insurgent, Night Owls, Chips, Submerged, Maze Runner: The Scorch Trials and Maze Runner: The Death Cure. She is also starring in the 2018 film Alita: Battle Angel as Alita. Born Rosa Bianca Salazar on July 16, 1985, in British Columbia, Canada, she was raised primarily in Greenbelt, Maryland, USA. She began performing in New York City and moved to Los Angeles in 2009 and pursued acting. She has contributed in several sketches. 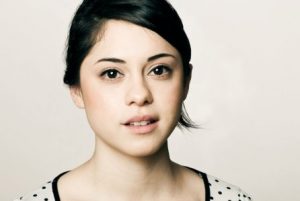 Rosa Salazar Facts:
*She was born July 16, 1985 in Canada (sometimes listed as British Columbia, Canada and sometimes Greenbelt, Maryland).
*Is part Peruvian.
*She became an entertainer at the age of 15.
*She is a dual American/Canadian citizen.
*Follow her on Instagram.