Rosie O’Donnell is an American television host, comedian, producer, actress and author who hosted her own syndicated daytime talk show, The Rosie O’Donnell Show, between 1996 and 2002, which won several Daytime Emmy Awards. From 2006 to 2007, O’Donnell was the host of the panel talk show The View on ABC. From 2009 to 2011, she hosted Rosie Radio on Sirius XM Radio, and hosted a second, short-lived talk show on OWN, The Rosie Show, from 2011 to 2012. From 2017 to 2019, O’Donnell starred on the Showtime comedy series SMILF. Born Roseann O’Donnell on March 21, 1962 in Commack, New York, to parents Roseann Teresa and Edward Joseph O’Donnell, she is the third of five children. She was educated at Commack High School, Dickinson College, and Boston University. O’Donnell began her comedy career as a teenager, appearing on Star Search, a talent show. She made her feature film debut in the 1992 film A League of Their Own, alongside Tom Hanks, Madonna, and Geena Davis. She has been married twice, and is the mother of five children: Parker, Chelsea, Blake, Vivienne and Dakota. 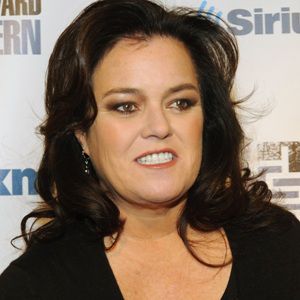 Rosie O’Donnell Facts:
*She was born on March 21, 1962 in Commack, New York, USA.
*She was homecoming and prom queen in high school.
*She began her career as a stand-up comedian.
*She won an Emmy Award in 1999.
*He has a very big toy collection, especially McDonald’s Happy Meal toys.
*She is huge fan of Savage Garden and Tom Cruise.
*She has a chain of roses tattoo on her ankle.
*She is a big fan of the Harry Potter book series.
*She is a big fan of New York Jets.
*She attended the 1993 wedding of Donald Trump and Marla Maples.
*In August 2012, O’Donnell suffered a heart attack.
*She is friends with Fran Drescher, Bill Cosby, Star Jones, Martha Stewart, Edward Asner, Jane Fonda, and Billy Porter.
*She has been an outspoken advocate for lesbian rights and gay adoption issues.
*Visit her official website: www.rosie.com
*Follow her on Twitter, YouTube and Instagram.