Rowdy Gaines is an American former competitive swimmer. A member of the U.S. Olympic Hall of Fame and the International Swimming Hall of Fame, Gaines is a three-time Olympic gold medalist. From 1978 to 1984, Gaines set 10 world records. At the time he was the world record holder in the 100-meter and 200-meter freestyles. Since retiring from competition, Gaines has been the voice of American swimming coverage, serving as an analyst for television network NBC. He has covered swimming at the Olympic Games since 1992 in Barcelona. 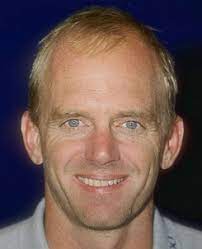 Rowdy Gaines Facts:
*He was born on February 17, 1959 in Winter Haven, Florida, United States.
*He tried several other sports as a teenager before discovering swimming.
*He received a swimming scholarship to Auburn University, where he became a five-time NCAA champion under the training of head coach Richard Quick.
*He set 10 world records between 1978 and the 1984 Olympic Games.
*He is a swimming analyst for television network NBC.
*Gaines and his wife, Judy, reside in Lake Mary, Florida, with their four daughters: Madison, Emily, Savanna and Isabelle.
*Visit his official website: www.rowdygaines.com