Ruffa Gutierrez is a Filipino actress, model, beauty queen and host who was the 1992 Look of the Year-Philippines, Binibining Pilipinas World 1993 and Second Runner-up to Miss World 1993. As an actress, Gutierrez has starred in such films as he Mommy Returns, My Monster Mom, Ang Pinakamagandang Hayop sa Balat ng Lupa, Working Girls, Shake, Rattle & Roll XI, and Shake, Rattle & Roll V. Her notable televison appearances include: Bakit Manipis ang Ulap?, Enchanted Garden, Glamorosa, I Love Betty La Fea, Kokey, and Habang Kapiling Ka. Born Sharmaine Ruffa Rama Gutierrez on June 24, 1974 in Manila, Philippines, she is the daughter of Eddie Gutierrez and Annabelle Rama. Ruffa is the half-sister of actor Tonton Gutierrez, and the sister of twin actors Raymond Gutierrez and Richard Gutierrez. She was married to Yilmaz Bektas and Richard Daloia. She has two children from her previous marriage to Turkish executive Yilmaz Bektas. 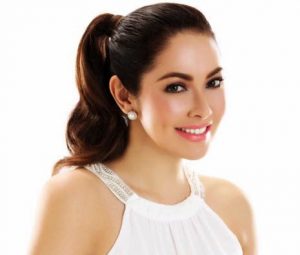 Ruffa Gutierrez Facts:
*She was born on June 24, 1974 in Manila, Philippines.
*She began her acting career as a teen in the 1980s, under BMG Films.
*She was a part of German Moreno’s That’s Entertainment in the early 1990s before becoming a beauty queen in 1993.
*She is the CEO of Intel Media Inc which runs Fashion TV Turkey.
*Follow her on Twitter, Facebook and Instagram.