Whitney Houston was an American recording artist, actress, model, and producer, best remembered by the public for her hit singles including “How Will I Know”, “I Have Nothing”, “My Love Is Your Love”, “I Wanna Dance With Somebody (Who Loves Me)” and her cover of Dolly Parton’s “I Will Always Love You”. Houston released her debut album, Whitney Houston, in 1985, followed by her second album, Whitney in 1987. These albums reached number one on the Billboard 200 in the United States and became two of the world’s best-selling albums of all time. Her first album featured the number-one singles “Saving All My Love for You”, “Greatest Love of All”, and “How Will I Know”, and her second album featured the number-one hits “I Wanna Dance with Somebody” and “So Emotional”. She is the most-awarded female artist of all time. As an actress, Houston made her film debut as Rachel Marron in the romantic thriller film The Bodyguard (1992). Born Whitney Elizabeth Houston on August 9, 1963 in Newark, New Jersey, she was the second child of Army serviceman and entertainment executive John Russell Houston, Jr. and gospel singer Cissy Houston. Her older brother Michael is a singer, and her older half-brother Gary Garland is a former basketball player. Housto began singing at a young age in gospel music at church, and became a background vocalist while in high school. She was educated at Mount Saint Dominic Academy, a Catholic girls’ high school based in Caldwell, New Jersey. She married Bobby Brown in 1992, and the couple had a daughter named Bobbi before getting divorced in 2007. On February 11, 2012, Houston was found dead in a Beverly Hills hotel room. She was 48. 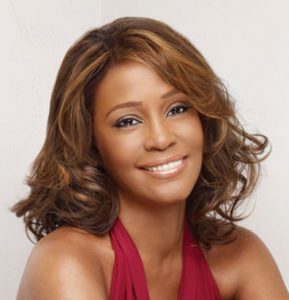 Whitney Houston Facts:
*She was born on August 9, 1963 in Newark, New Jersey, USA.
*She was named after actress Whitney Blake.
*She was the cousin of singing star Dionne Warwick and goddaughter of soul legend Aretha Franklin.
*She worked as a fashion model before she started working as a recording artist.
*She released her debut studio album, Whitney Houston, in February 1985.
*People Magazine named her one of the top 50 Most Beautiful People in the World in 1991.
*Her single “I Will Always Love You” is the 6th-best-selling single worldwide by sales (20 million).
*She was ranked #24 on VH1’s 100 Sexiest Artists.
*She was friends with Loretta Devine, Deborah Cox and Vivica A. Fox.
*She was a lifelong Democrat.
*Visit her official website: www.whitneyhouston.com