Rupert Graves is an English actor of film, television, and theatre. He is best known for his roles in A Room with a View, Garrow’s Law, Maurice, The Madness of King George, Death at a Funeral, V for Vendetta and The Forsyte Saga. In 2010, Graves began starring as DI Lestrade in the BBC television series Sherlock. Born Rupert S. Graves on June 30, 1963 in Weston-super-Mare, United Kingdom, to parents Mary Lousilla and Richard Harding Graves, he was educated at Wyvern Community School, which Graves left at the age of 15. He has been married to Susie Lewis since 2001. They have five children; Josef, Ella, Noah, Iggy and Zoë. 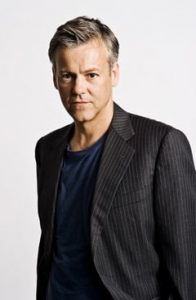 Rupert Graves Facts:
*He was born on June 30, 1963 in Weston-super-Mare, United Kingdom.
*He briefly worked as a circus clown before he started his acting career.
*He made his professional stage debut in 1983 in The Killing of Mr.
*He is good friends with Una Stubbs.
*Visit his official website: www.rupert-graves.com
*Follow him on Twitter.