Rush Limbaugh was an American conservative radio talk show host and writer. He was best known as the host of The Rush Limbaugh Show, which was nationally syndicated on AM and FM radio stations. From 1992 to 1996, Limbaugh hosted a national television show, and was among the most highly compensated figures in American radio. As an author, Limbaugh wrote seven books; his first two, The Way Things Ought to Be (1992) and See, I Told You So (1993), made The New York Times Best Seller list. Limbaugh was married to Kathryn Rogers, Marta Maranda Fitzgerald, Michelle Sixta Wennerholm and Roxy Maxine McNeely. He died on February 17, 2021 in Palm Beach, Florida, USA. 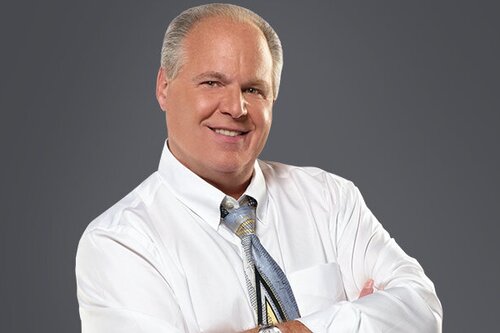 Rush Limbaugh Facts:
*He was born on January 12, 1951 in Cape Girardeau, Missouri, into the prominent political Limbaugh family; his father was a lawyer and a United States fighter pilot who served in the China Burma India Theater of World War II.
*His grandfather, the first Rush Hudson Limbaugh, was America’s Ambassador to India in the Eisenhower administration.
*He graduated in 1969 from Cape Girardeau Central High School, where he played football.
*Older brother of columnist David Limbaugh.
*He broke into a radio career in the 1970s.
*He was the host of The Rush Limbaugh show.
*He was a member of the Radio Hall of Fame.
*He was one of the most highly paid people in the US media.
*He went deaf and received a cochlear implant in 2001.
*Forbes listed his earnings at $84.5 million in 2018.
*President Donald Trump awarded him the Presidential Medal of Freedom in February 2020 during the State of the Union Address.
*He is mentioned in Alicyn Packard’s song “The Pinky Song.”.
*Visit his official website: www.rushlimbaugh.com