Russ is an American rapper, singer, songwriter and record producer who is a part of the rap group ‘Diemon Crew.’ Russ is best known for the hit singles “What They Want” and “Losin Control”, which peaked respectively at #83 and 63 on the US Billboard Hot 100. His other notable singles include “Goodbye” and “Too Many.” Russ released his first studio album, There’s Really a Wolf on May 5, 2017. The album debuted at #7 on the US Billboard 200 and #4 on the US Top R&B/Hip-Hop Albums charts. Born Russell James Vitale on September 26, 1992 in Secaucus, New Jersey, he belongs to Sicilian descent. Russ started writing raps in his notebook at seven years old and started making his own beats when he was 14. He recorded his first song at 18 years old. He had released 11 albums before getting his SoundCloud set up. 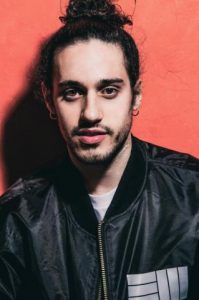 Russ Facts:
*He was born on September 26, 1992 in Secaucus, New Jersey, USA.
*His full name is Russell James Vitale.
*He was taught to play guitar by his father.
*One half of the indie label DIEMON with his childhood friend Bugus.
*He has heterochromia so he has two different eye colors.
*Visit his group’s official website: www.diemon.com
*Follow him on Twitter, YouTube, Facebook and Instagram.