Ruth B is a Canadian singer and songwriter who first achieved fame by singing songs on the video sharing application Vine. Her debut single, “Lost Boy,” achieved remarkable success and was certified 3x platinum in Canada and 2x platinum in the United States. Her debut EP, The Intro, was released on November 27, 2015. It has four singles including “Lost Boy”. She released her debut music album Safe Haven via Columbia Records in May 2017. Born Ruth Berhe on July 02, 1995 in Edmonton, Alberta, Canada, her parents were emigrated from Ethiopia in the 1980s. She attended Ross Sheppard High School. After graduating from Ross Sheppard High School in 2013, Berhe attended MacEwan University, but took time off her studies to focus on music. She started her singing career by posting songs on Vine in May 2013. 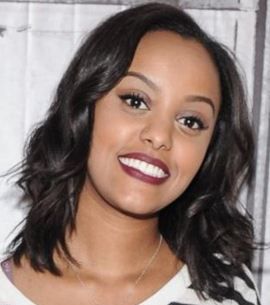 Ruth B Facts:
*She was born on July 02, 1995 in Edmonton, Alberta, Canada.
*Her parents emigrated to Canada from Ethiopia in the 1980s.
*Starting at age 8, she attended piano classes for 5 years.
*She worked at a Reitman clothing store in Edmonton as a teenager.
*She posted her first Vine video on May 9, 2013, and started making singing Vines in 2014.
*Her debut single, “Lost Boy,” reached #14 on Canadian Hot 100.
*She released her debut EP, The Intro, in November 2015.
*She is fluent in Amharic.
*Visit her official website: www.ruthbofficial.com
*Follow her on Twitter, Facebook, YouTube and Instagram.