Ryan Newman is an American actress and model, best known for roles such as Ginger Falcone in the Disney XD series Zeke and Luther, Cindy Collins in the 2006 action comedy film Zoom, Allison in the Nickelodeon series The Thundermans and Emily Hobbs in the Nickelodeon sitcom See Dad Run. She has also appeared in “Hannah Montana,” “Good Luck Charlie,” “Big Time Rush,” “Sharknado: The 4th Awakens,” and “The Last Sharknado: It’s About Time.” Born Ryan Whitney Newman on April 24, 1998 in Manhattan Beach, California, to parents Jody and Rick Newman, she has an older sister named Jessica. She entered the entertainment industry at the age of 3. As a child model, Newman appeared in photo shoots for Inspire Magazine, Kaiya Eve Photoshoots 2009 and Dream Magazine. She has dated Ryan Ochoa, Bradley Steven Perry, Logan Shroyer, and Jack Griffo (2013-2016). 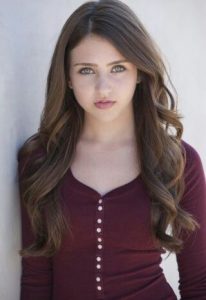 Ryan Newman Facts:
*She was born on April 24, 1998 in Manhattan Beach, California, USA.
*She trained in Karate for 2 weeks and dyed her hair blonde for Zoom (2006).
*She won the 2010 Young Artist Award for ‘Best Performance in a TV Series by a Leading Actress’.
*She can play the guitar and piano.
*Vanilla is her favorite ice cream flavor.
*She is afraid of insects.
*She is good friends with Taylor Dooley.
*She dated actor Jack Griffo from 2013 to 2016.
*Follow her on Twitter, Facebook and Instagram.