Ryan Ross is an American musician, singer and songwriter. He is best known as the former lead guitarist and songwriter of the rock band Panic! at the Disco whose debut album went triple platinum and charted at No. 13 on the US Billboard 200, spearheaded by the hit single “I Write Sins Not Tragedies”, which peaked at No. 7 in the Billboard Hot 100. In 2009, Ross left Panic! At the Disco. He was also a member of the band called The Young Veins. Ross released a solo two-track untitled EP via SoundCloud in 2013. 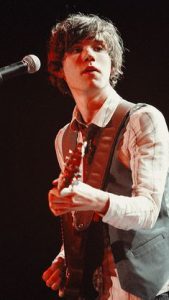 Ryan Ross Facts:
*He was born on August 30, 1986 in Las Vegas, Nevada, USA.
*When Ross was 12, his grandparents bought him a guitar for Christmas.
*He is a former member of the band Panic! at the Disco, formed in 2004 by childhood friends Brendon Urie, Ryan Ross, Brent Wilson and Spencer Smith.
*He had his ears gauged as a teen.
*His father died in July 2006.
*He has tattoos inspired by a Tom Waits song.
*He currently resides in Los Angeles with his dog named Dottie.
*Visit his official website: www.officialryanross.com
*Follow him on Twitter and Instagram.