Dallon Weekes is an American singer, songwriter, musician, and record producer. He is best known for his work as the bassist, keyboardist, backing vocalist, and songwriter of the band Panic! at the Disco before his departure in 2017. With Panic! at the Disco, Weekes released his debut album titled Vices & Virtues in 2011. He was also the frontman for the indie band The Brobecks. He later created a secretive band called I Dont Know How But They Found Me with drummer Ryan Seaman.

Born Dallon James Weekes on May 4, 1981 in Verona, Missouri, to a Mormon family, he has one older sibling and two younger siblings. He attended Clearfield High School. In March 2006, he married Breezy Weekes. They have two children together; a daughter named Amelie Olivia Weekes and a son named Knox Oliver Weekes. 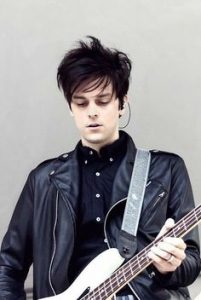 Dallon Weekes Facts:
*Born on May 4, 1981 in Verona, Missouri, he was raised in a Mormon family.
*He dropped out of Weber State University to pursue music full time.
*He joined Panic! at the Disco to play bass and synth for their tour.
*Founding member of the duo group I Don’t Know How But They Found Me.
*Follow him on Twitter, YouTube, Facebook and Instagram.