Sachin Tendulkar is a retired Indian cricketer widely acknowledged as one of the greatest batsmen of all time and is widely known as the “God of Cricket.” He is the leading run-scorer and century maker in Test and One Day International cricket. Tendulkar was born Sachin Ramesh Tendulkar in a Rajapur Saraswat Brahmins family in Mumbai. His father, Ramesh Tendulkar, who was a Marathi novelist, and his mother, Rajni, worked in the insurance industry. He has three elder siblings: two half-brothers Nitin and Ajit, and a half-sister Savita. He has been married to Anjali Tendulkar since May 24, 1995. They have two children: son, Arjun, and daughter, Sara. 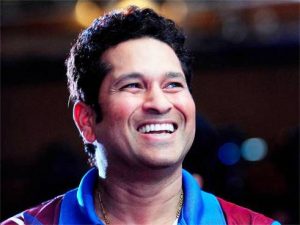 Sachin Tendulkar Facts:
*He wanted to be a professional Tennis player.
*He was named by his father after Sachin Dev Burman.
*He made a special appearance in the Bollywood film “Stumped” in 2003.
*His wife Anjali has never watched Tendulkar bat LIVE – only recordings.
*He is a very good cook, and once cooked a brinjal curry for his teammates.
*His brother Ajit introduced him to cricket at a very young age to put a leash on his mischievous and bullish behavior.
*He writes with his left hand but, when it comes to cricket, he is a right-handed batsman and a right-handed spin bowler.
*Sunil Gavaskar had gifted Tendulkar a pair of pads when he was a schoolboy – the same pair of pads he wore on his Test debut four years later against Pakistan, in 1989.
*Follow Sachin Tendulkar on Twitter, Facebook, YouTube, LinkedIn, and Instagram.