Saffron Burrows is a British-American actress and model. She is known for her roles in such films as Circle of Friends, Wing Commander, Deep Blue Sea, Gangster No. 1, Enigma, Troy, Reign Over Me and The Bank Job. Her notable television appearances include: Boston Legal, My Own Worst Enemy, Law & Order: Criminal Intent, and Mozart in the Jungle. Born Saffron Dominique Burrows on October 22, 1972 in London, England, UK, she is the daughter of Susie Burrows, a teacher, and Paul R. Burrows, an architect and teacher. She began modelling after being discovered at the age of 15 in Covent Garden by the fashion photographer Beth Boldt. She made her film debut in 1993 with a small role in Jim Sheridan’s In the Name of the Father. Saffron has two children with her wife Alison Balian-a son and a daughter Daisy Alice Winnie Balian-Burrows. Both were born by Burrows. Previously, she was in a committed relationship with actress Fiona Shaws from 2002 until 2011. 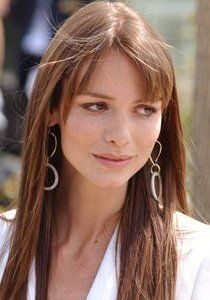 Saffron Burrows Facts:
*She was born on October 22, 1972 in London, England, UK.
*She was discovered by the fashion photographer Beth Boldt in Covent Garden.
*She has dual citizenship of British and American. (Became a US citizen in 2009)
*She speaks Spanish and French fluently.
*She plays acoustic guitar.
*Visit her official website: www.saffronburrows.org
*Follow her on Twitter, Facebook and Instagram.