Salma Hayek is a Mexican-American actress, director, producer, and model who was nominated for an Academy Award for her performance as Frida Kahlo in the 2002 film Frida. Her other notable film appearances include: Fools Rush In, 54, Desperado, Wild Wild West, In the Time of the Butterflies, Lonely Hearts, Americano, La chispa de la vida, and Beatriz at Dinner. She guest-starred on the ABC television comedy-drama Ugly Betty, for which she received a Primetime Emmy Award nomination for Outstanding Guest Actress in a Comedy Series. She also guest-starred on the NBC comedy series 30 Rock from 2009 to 2013. Born Salma Hayek Jiménez on September 2, 1966 in Coatzacoalcos, Veracruz, Mexico, her father, Sami Hayek Domínguez, is Lebanese Mexican while her mother Her mother, Diana Jiménez Medina, is Mexican of Spanish descent. She was educated at Schools of the Sacred Heart and Ramtha’s School of Enlightenment. She also attended university at the Universidad Iberoamericana where she studied International Relations. She is married to French businessperson François-Henri Pinault with whom she has a daughter, Valentina. 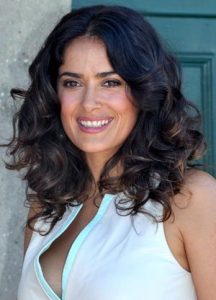 Salma Hayek Facts:
*She was born on September 2, 1966 in Coatzacoalcos, Veracruz, Mexico.
*She is the daughter of a Mexican mother and Lebanese father.
*Her name, “Salma” is an Arabic name that means “calm” or “peace”.
*Her brother, Sami Hayek Jr, designs custom chairs whose celebrity clients include Jennifer Aniston and her ex-husband, Brad Pitt.
*She studied international relations & drama at the Universidad Iberoamericana in Mexico City.
*She has her own film production company, Ventanarosa.
*Most successful Latin-American actress in Hollywood since Carmen Miranda.
*She speaks Spanish, Arabic, Portuguese and English fluently.
*Jillian Roscoe is her spokeswoman.
*People Magazine named her one of the top 50 Most Beautiful People in the World in 1996, 2003 and 2008.
*She was ranked #34 on Maxim magazine’s Hot 100 in 2005, then #90 in 2007.
*She is good friends with Valeria Golino, Ashley Judd and Penélope Cruz.
*Follow her on Twitter, Facebook and Instagram.