Sam Smith is a British singer and songwriter. He became known in October 2012 when Disclosure’s breakthrough song “Latch” came out. It reached #11 on the UK Singles Chart. His 2014 single, “Stay with Me”, became a major international success. In May 2014, he released his debut studio album, In the Lonely Hour, on Capitol Records UK. He was also featured on the #1 Naughty Boy single “La La La.” He won the Brits 2014 Critics’ Choice Award, beating fellow nominees Chlöe Howl and Ella Eyre. His song “Stay With Me” won Song of the Year in 2015. Born Samuel Frederick Smith on May 19, 1992 in Bishop’s Stortford, England to parents Kate Cassidy and Frederick Smith, he has two sisters, Mabel and Lily. He attended St Mary’s Catholic School in Bishop’s Stortford. He started his singing career in 2012. In 2017, he began dating Brandon Flynn. 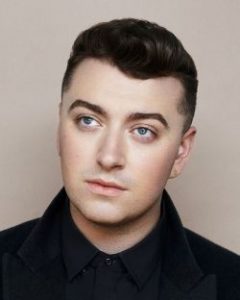 Sam Smith Facts:
*He was born and raised in Bishop’s Stortford, England
*He is the third-cousin of Alfie Allen and Lily Allen.
*He is a trained jazz singer.
*He was a part of the Bishop’s Stortford Junior Operatics and the Cantate Youth Choir.
*He publicly came out as gay in May 2014.
*He is good friends with fashion model Daisy Lowe.
*He has double-jointed index finger.
*He cites artists Adele, Amy Winehouse, Lady Gaga, Christina Aguilera, Beyonce, Whitney Houston and Mariah Carey as his influences.
*Visit his official website: www.samsmithworld.com
*Follow him on Twitter, YouTube, Google+, Facebook and Instagram.