Leelee Sobieski is an American actress of film and television. She is best known for her roles in television, such as Joan of Arc, Uprising, Hercules, Charlie Grace, and NYC 22, and in the films Jungle 2 Jungle, Deep Impact, A Soldier’s Daughter Never Cries, Here on Earth, Eyes Wide Shut and In the Name of the King: A Dungeon Siege Tale. For her role in the 1999 TV movie Joan of Arc, she was nominated for an Emmy. Born Liliane Rudabet Gloria Elsveta Sobieski on June 10, 1983 in New York, USA to Elizabeth Salomon and Jean Sobieski, she has a younger brother named Robert. She is of Polish and Swiss descent on her father’s side, and of Dutch, Russian and Belarusian Jewish descent on her mother’s side. After graduating from Trevor Day School, she studied fine art and literature at Brown University. She was discovered by a talent agent in the cafeteria of her New York City school. She is married to fashion designer Adam Kimmel with whom she has two children. She was previously married to Matthew Davis. 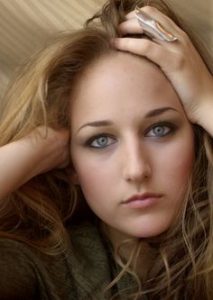 Leelee Sobieski Facts:
*She was born on 10 June 1983 in New York City, New York.
*She became known in her teens for her role in the 1998 film Deep Impact and as Milich’s daughter in Eyes Wide Shut.
*She speaks French fluently.
*She enjoys painting, ceramics, poetry, martial arts, and horseback riding.