Samantha Barks is a Manx actress and singer who has worked on stage, film, and television. She is best known for her role as Éponine in the 2012 musical film Les Misérables. In 2008, Barks competed and placed third in BBC’s talent show-themed television series I’d Do Anything. She released her debut album Looking in Your Eyes in April 2007. Born Samantha Jane Barks on October 2, 1990 in Isle of Man, to parents Ann and Richard Barks, she has two older siblings, a sister named Kim, and a brother, Carl. She began training in ballet at the age of 3. Samantha was educated at Laxey Primary School in Laxey and St Ninian’s High School, Douglas in Isle of Man. She studied Musical Theatre and Shakespeare at Arts Educational and Royal Academy of Dramatic Arts, respectively. Barks first achieved fame after coming third in the BBC talent show–themed television series I’d Do Anything in 2008. She made her film debut as Éponine in the 2012 film adaptation of Les Misérables. In December 2015, she began dating Jack Fox. She previously dated Nick Jonas (2010-2011), Matt Johnson (2013), David Gandy (2013), and Richard Fleeshman. 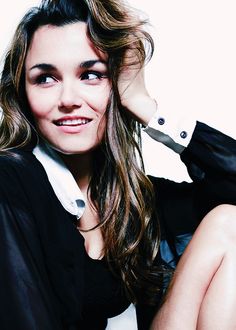 Samantha Barks Facts:
*She was born on October 2, 1990 in Isle of Man, UK.
*She started dancing when she was three years old.
*She released her debut album, Looking in Your Eyes April 2007.
*She competed in I’d Do Anything in 2008.
*She portrayed Éponine in the 2012 film version of the musical Les Misérables.
*She won the role of Eponine in Les Misérables over Taylor Swift.
*She launched a new Manx Ship called the Caly Manx in China in September 2009.
*She has a pet chihuahua named Lily.
*Follow her on Twitter, YouTube, Facebook and Instagram.