Grigor Dimitrov is a Bulgarian professional tennis player who achieved a career-high singles ranking of World No. 3 on November 20, 2017. Turning professional in 2008, Dimitrov has won 8 ATP singles titles to date. He is the only Bulgarian tennis player ever to be ranked inside the top 10 ATP Singles. Born on May 16, 1991 in Haskovo, Bulgaria, to parents Dimitar, a tennis coach, and Maria, a sports teacher and former volleyball player, he began to play tennis daily when he was 5. In 2008, Dimitrov moved to Paris, France, and joined Patrick Mouratoglou’s Tennis Academy. He was a Junior Wimbledon and US Open champion in 2008 and was the world number 1 as a junior player. He turned pro in 2008. In 2012, he began a relationship with Russian tennis player Maria Sharapova. They separated in July 2015. At the beginning of 2016, Dimitrov started dating Nicole Scherzinger. 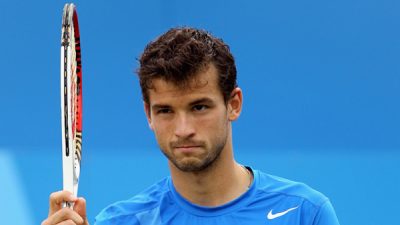 Grigor Dimitrov Facts:
*He was born on May 16, 1991 in Haskovo, Bulgaria.
*He is the most successful Bulgarian male tennis player.
*At 14, he won the European U14 Championship.
*He turned professional in 2008.
*He beat Roger Federer in five sets at the 2019 US Open.
*He is very good friends with Novak Djokovic.
*Besides his native Bulgarian language, he can speak English.
*Visit his official website: www.grigor-dimitrov.com
*Follow him on Twitter, Facebook and Instagram.