Irish-born American academic, diplomat and author who served as the 28th United States Ambassador to the United Nations from 2013 to 2017. A member of the Democratic Party, Power was a senior adviser to Barack Obama. Her book, A Problem from Hell: America and the Age of Genocide, won the 2003 Pulitzer Prize in Nonfiction. Born Samantha Jane Power on September 21, 1970 in Castleknock, Ireland, to parents Vera and Jim Power, she moved to Pittsburgh when she was nine. Power did her schooling from Mount Anville Montessori Junior School in Goatstown, Dublin, and Lakeside High School in Atlanta, Georgia. She earned her B.A. degree from Yale University and her J.D. degree from Harvard Law School. She began her career as a war correspondent covering the Yugoslav Wars before embarking on an academic career. She has been married to Cass Sunstein since July 4, 2008. They have two children. 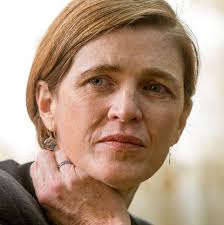 Samantha Power Facts:
*She was born on September 21, 1970 in Castleknock, Ireland.
*She was a member of the cross country team and the basketball team while attending Lakeside High School in Atlanta, Georgia.
*She graduated from Yale University in 1992.
*She became an American citizen in 1993, at age 23.
*She became the Founding Executive Director of the Carr Center for Human Rights Policy at the Harvard Kennedy School in 1998.
*She is a member of the Democratic Party.
*She was listed as the 41st most powerful woman in the world by Forbes in 2016.
*Visit her official website: www.samanthapower.com
*Follow her on Twitter, Facebook and Instagram.