Samantha Stosur is an Australian professional tennis player who is a former world No. 1 on the WTA Tour in doubles. Samantha won her first Grand Slam singles, the 2011 US Open, defeating Serena Williams in the final. Born as Samantha Jane Stosur in Brisbane, Queensland, Australia, Samantha is the daughter of Tony and Diane, and has two brothers named Dominic and Daniel. 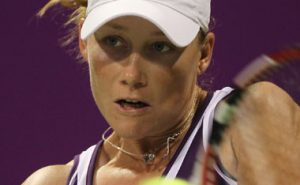 Samantha Stosur Education:
She was educated at Helensvale State High School on the Gold Coast and Gaven State School.

Samantha Stosur Facts:
*She started playing tennis aged eight when a friend gave her a racquet for Christmas.
*She defeats Serena Williams to win U.S. Open final in 2011.
*She won several Grand Slam titles, including singles, women’s doubles, and mixed doubles.
*Follow her on Twitter, Facebook and Instagram.