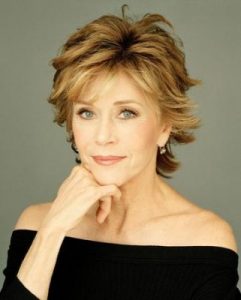 Jane Fonda Facts:
*She is of Dutch, English, Scottish, as well as more distant French, Italian, and Norwegian descent.
*Her father, Henry Fonda, was counted amongst the best actors of the 20th century.
*Jane and her father were the first father-daughter pair to be Oscar-nominated the same year. (1982)
*She won her first Oscar for Klute in 1971.
*She dropped out of Vassar College to become a fashion model.
*She was voted the 51st Greatest Movie Star of all time by Entertainment Weekly.
*In 2005, Premiere Magazine ranked her as #32 on a list of the Greatest Movie Stars of All Time in their Stars in Our Constellation feature.
*Official Website: http://www.janefonda.com/
*Follow her on Twitter and Facebook.