Sammi Hanratty is an American actress of film and television. She is known for television roles such as Chuck in Pushing Daisies, Kassidi in Shameless, Dollie Trask in Salem, Holly in The Suite Life of Zack & Cody, and Jen Gerhardt in The Unit, as well as film roles such as Chrissa Maxwell in An American Girl: Chrissa Stands Strong, Whitney Brown in The Greening of Whitney Brown, and Glenda (Elf #1) in The Santa Clause 3: The Escape Clause. She has also appeared as a guest-star in several television series such as Mad Men, Shake It Up, Daybreak, Perception, and That’s So Raven. Between 2007 and 2008, Hanratty was nominated for three Young Artist Awards. Born Samantha Lynne Hanratty on September 20, 1995 in Scottsdale, Arizona, she is the youngest in a family of three boys and five girls. Hanratty moved to Los Angeles in 1997. She was educated at Laurel Springs School. She has been in a relationship with gaming legend Lucas Watson, aka KYRSP33DY since 2016. 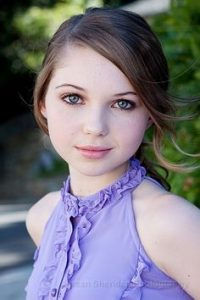 Sammi Hanratty Facts:
*She was born on September 20, 1995 in Scottsdale, Arizona, USA.
*She is the younger sister of actress Danielle Hanratty and Ash Hanratty.
*She began her career appearing in the commercials for Pringles.
*Her favorite actresses are Amanda Bynes and Nicole Kidman.
*She is friends with actresses Jennette McCurdy and Abigail Breslin.
*She is a StarPower Ambassador for the Starlight Children’s Foundation.
*She enjoys swimming, gymnastics, bike riding, roller blading and hanging out with her family and friends.
*She has two dogs named Sara and Kota.
*Visit her official website: www.sammihanratty.com
*Follow her on Twitter, Facebook and Instagram.